Twitter users have taken to the platform to call out Abia State governor, Okezie Ikpeazu after the state recorded its first two COVID-19 cases, despite the governor stating that the deadly virus cannot be recorded in Abia.

Abia State has recorded two new cases, NCDC announced on Twitter. These are the first cases recorded in the South-Eastern state since the outbreak began.

The Nigerian Centre for Disease Control confirmed the cases on Monday, April 20, tweeting:

Thirty-eight new cases of #COVID19 have been reported; 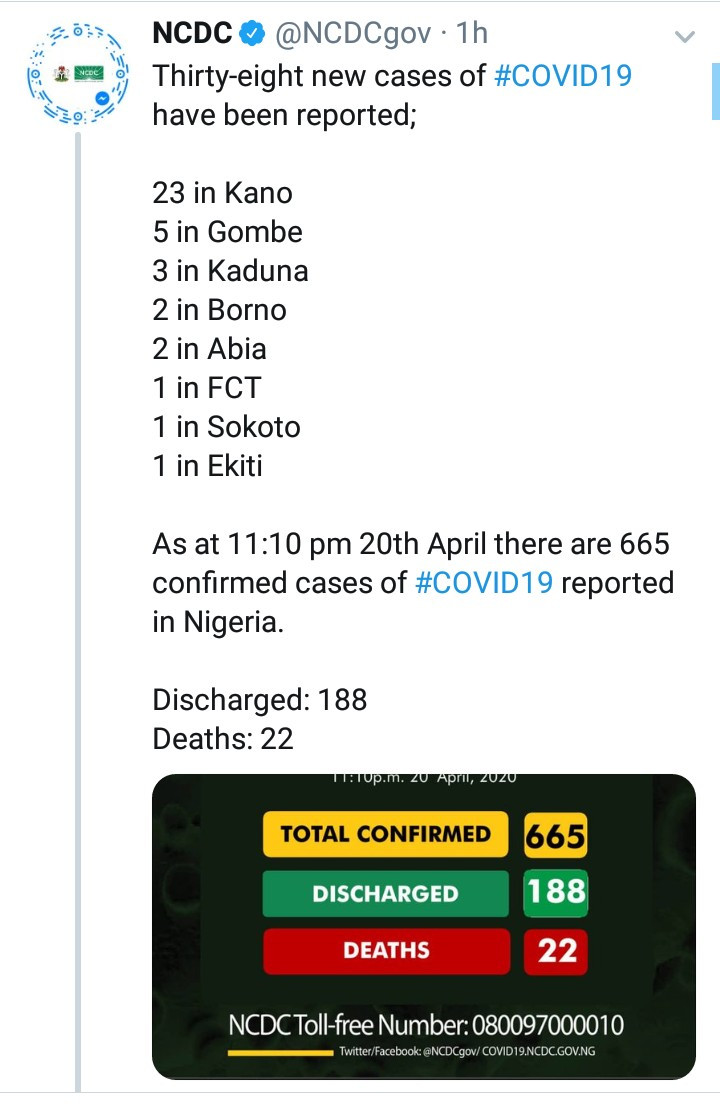 Commissioner for information in Abia state, Chief John Okiyi-Kalu, also confirmed this in a statement and stated actions being taken.

The statement read in part, “We have received the report of two confirmed cases of COVID-19 in Abia State this (Monday) evening from NCDC. Both patients are advanced in age but currently stable at an isolation centre in our state.

“On the direction of the Governor, Dr Okezie Ikpeazu, we have deployed our ventilators to the isolation center in readiness for their use if eventually required to nurse them back to good health.

“Our well-trained medical personnel are offering all necessary support and we hope and pray the patients survive this ailment.

“Contact tracing has commenced in earnest and our rapid response team is currently moving to bring in those who may have had contact with the two index cases.

He, however, added that the result of one Prosper Vincent, who was arrested and isolated in the state came back negative.

He said: “Meanwhile, the result of ‘Prosper Vincent’ returned negative and he will promptly be released from isolation.”

The two Coronavirus patients in Abia State are from Ukwa and Umuahia North areas and those who may have come in contact with them have been advised to immediately call 0700 2242 362.

Following the announcement of COVID-19 cases in Abia State, Nigerians took to Twitter to call out the state governor, Okezie Ikpeazu for his statement that Coronavirus cannot be recorded in Abia State because Abia is the only state mentioned in the Bible.

Ikpeazu, who is a biochemist, said this during a Live Facebook chat with Onyebuchi Ememanka, his chief press secretary.

In the Bible, Luke chapter one verse five traces a certain priest’s origin to “Abia”

That verse states: “There was on the days of Herod, the king of Judaea, a certain priest named Zacharias, of the course of Abia; and his wife was of the daughters of Aaron, and her name was Elisabeth.”

Ikpeazu said because Abia is the only state mentioned in the Bible God will not allow any disease touch His people.

He said at the time: “Abia is the only state that is mentioned in the Bible. We have a promise from God that none of these diseases will touch God’s people. And I hold on to God’s promise.

“We saw Ebola, it did not get to us. We saw monkey pox, it didn’t get to us. Even this one (coronavirus) will also pass us by.”

With two new cases in the state, Twitter users were all too ready to call him out.

See some reactions below. 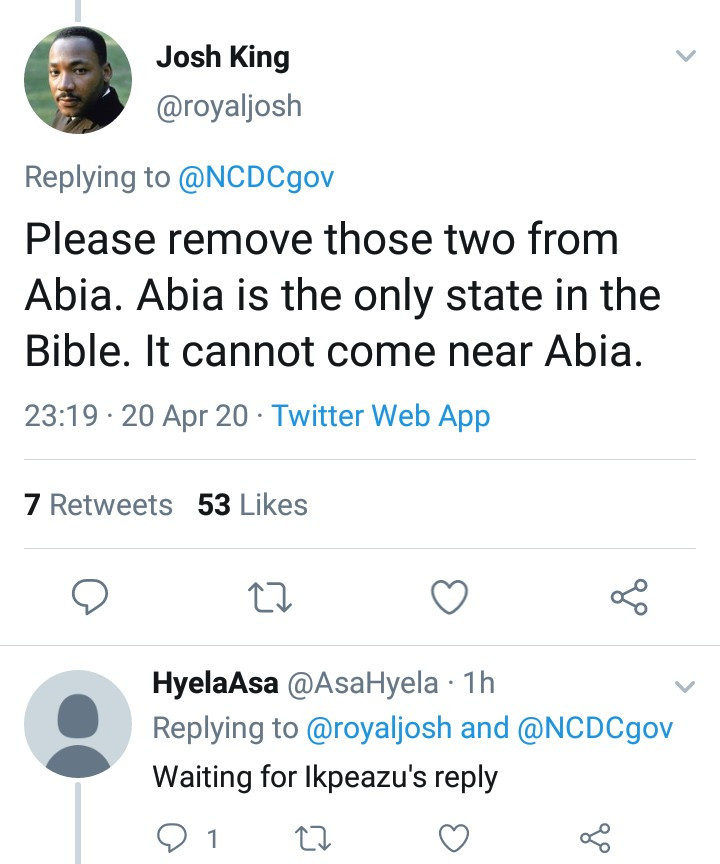 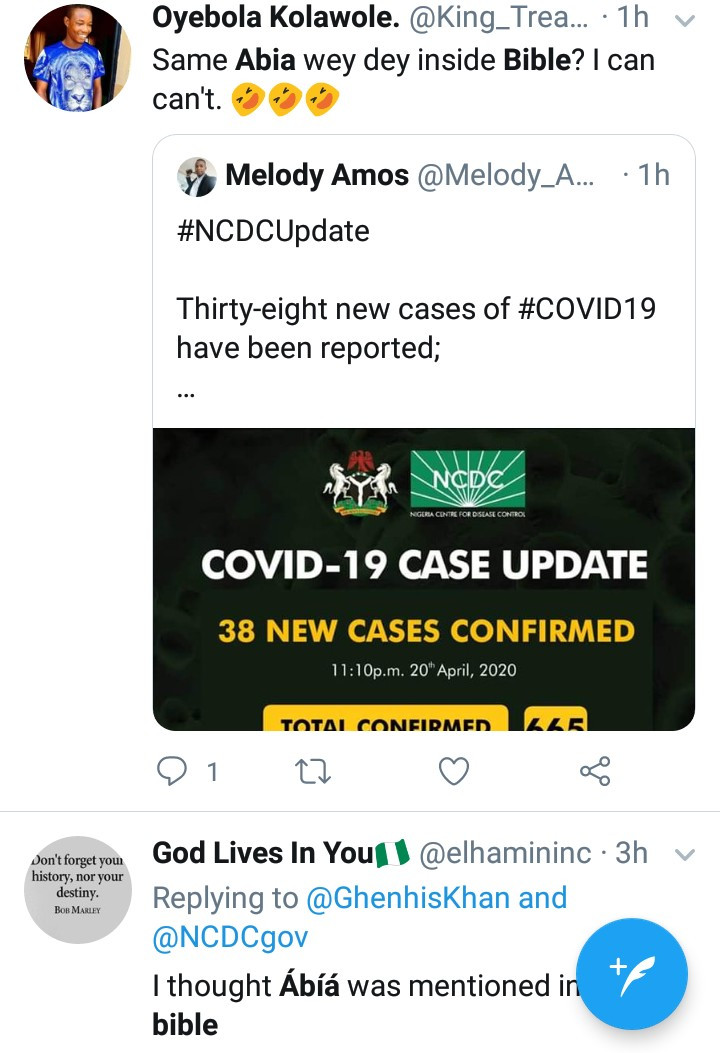 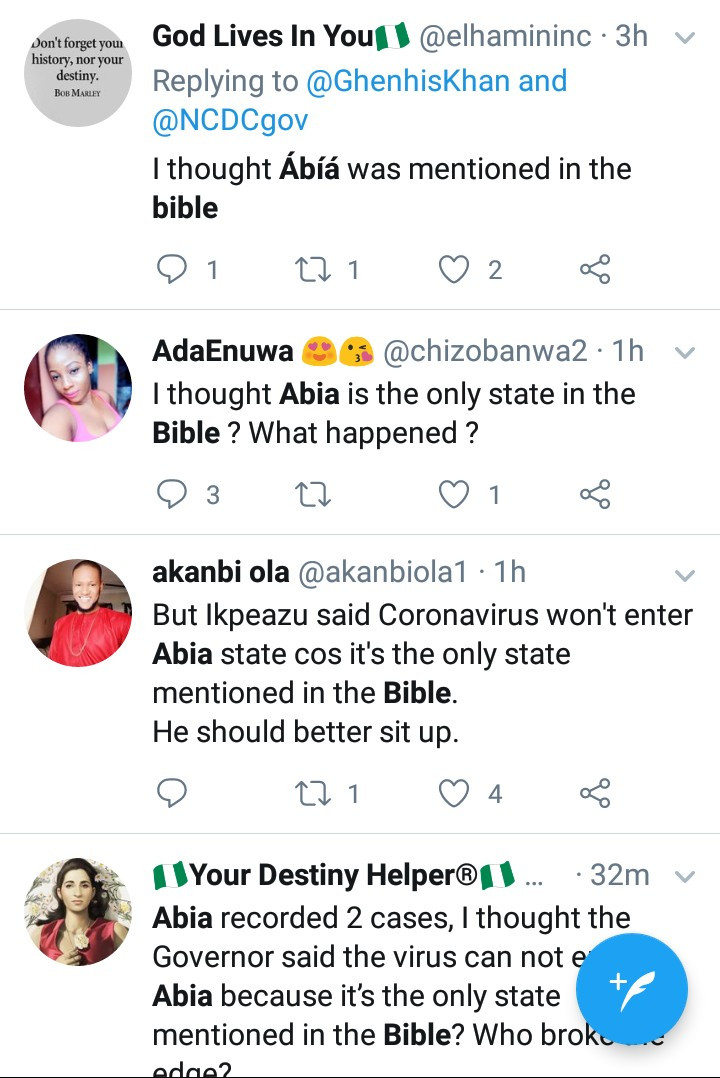